Hey there! It’s been a while (again), I know. But, hopefully this delicious post will make up for it! 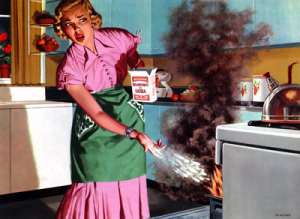 Cooking has never been my strong suit. A general lack of interest coupled with a super short attention span usually resulted in all situations involving me+kitchen = disastrous at best. As my BFF will gladly vouch, I’m that chick who can’t even boil water. Literally.  As in, I have actually screwed up boiling water. Truth.  To redeem myself just a little, I could always make a mean boxed macaroni & cheese, or microwaved potato, or whatever. But, request anything involving measuring things or stirring occasionally and FAIL.

I’ve lived away from home for many years and survived just fine. I wasn’t raised on fast food or frozen dinners, so those things never appealed to me, and aside from the college dorm days, I haven’t eaten too much Ramen. I simply ate a lot of things that don’t require cooking –  pb&j, tuna fish, cereal, granola and yogurt, salads, fresh fruit, raw veggies – or went out to eat at a restaurant.

Enter my good old midwestern fiancé. While JD is certainly a liberal guy who in no way expects me to cook or clean while he is at work, he likes big fulfilling dinners that include meat and carbs. It’s easy enough to get take out or pre-prepared dinners, but being home all day has made me curious about all that domestic stuff. It’s as if cooking has magically turned into an art project rather than a necessary chore.

I still don’t have much patience for super exact recipes or techniques; I’m totally in a “throw things together and see what works” phase. But, for me experimenting is most of the fun. We live a block away from Trader Joe’s and it’s become a little ritual to walk and pick up the night’s ingredients. Learning how to mix left overs in new ways has helped maximize whatever we already have in the fridge, too.

While nothing would win a prize for beauty, I promise it’s all been delicious, inexpensive, and mostly fresh & healthy.